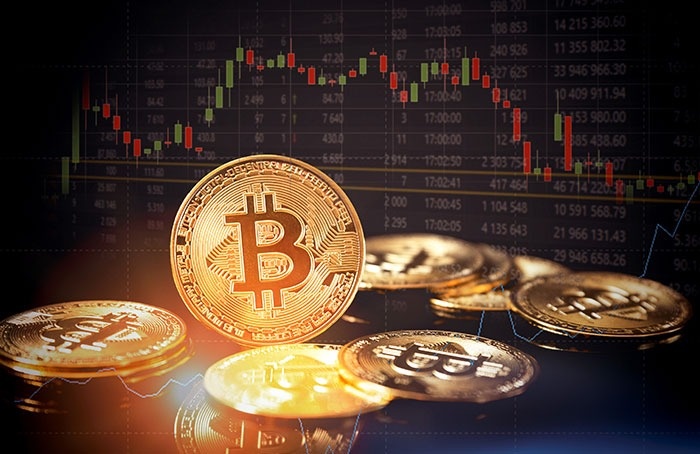 Our clients frequently ask about cryptocurrency, and this article is provided to answer basic questions on the subject. JK Investment Group does not provide guidance or make investments in cryptocurrency due to regulatory concerns, agreements with our securities trading partner and our own ethical practices.

When FTX Trading Ltd. collapsed in November, it was the third-largest cryptocurrency exchange in the world. It became insolvent at the tail end of another tumultuous year in which the price of Bitcoin hit a towering high and then fell by two-thirds of its value.

But cryptocurrency has been making headlines since long before the fall of FTX, and it’s likely to continue.

So how does cryptocurrency work, and what is it that speculators and investors see in this unregulated digital currency?

Bitcoin and its enabling “blockchain” technology were introduced to the world on Oct. 31, 2008 in a nine-page white paper titled “Bitcoin: A Peer-to-Peer Electronic Cash System.” Released through a cryptography email listserv by Satoshi Nakamoto – a pseudonym for the mysterious and still-unknown person or group behind Bitcoin’s inception – the paper described how a digital currency could be transferred directly from one party to another without relying on a financial institution to validate each transaction.

It described a public ledger system—blocks of information linked in a chain across so many computers that nobody would be able to hack it.

The catch was that it required a lot of individuals who would put up their computing power and pay for the electricity to build the blockchain. For this, Bitcoin developed an ingenious incentive: It would pay them in bitcoins. These people were called bitcoin miners.

As proof of concept, mining for bitcoins began within weeks. About 15 months passed until a bitcoin miner in Florida wrote on an online bulletin board that he would pay 10,000 bitcoins to anyone who would bring him two large pizzas. It took four days, but on May 22, 2010, somebody showed up at his door with the food—worth $25. Now celebrated as Bitcoin Pizza Day, that was the first time cryptocurrency was used to buy anything in the real world, and it pegged the value of a single bitcoin at 0.25 cents.

That’s why today there are more than 20,000 cryptocurrencies, of which Bitcoin is simply the first and largest. According to CoinMarketCap.com, the value of all existing cryptocurrency approaches $1 trillion, with Bitcoin accounting for about a third.

What you’re buying when you invest in crypto

Cryptocurrency exists only as coded tokens within the blockchain. When you buy or sell crypto, you’re adding a transaction to the blockchain, which itself is responsible for keeping track of who owns each token.

Most people who invest in cryptocurrency keep an account on one of the many large crypto exchanges, such as Binance, Coinbase and the erstwhile FTX. You connect your traditional checking account to fund purchases, and making transactions is like trading stocks through an online broker like E*Trade.

The other option is to use a cryptocurrency wallet, which stores the coded keys and digital signatures that interact with the blockchain to track balances and authorize transactions.

A crypto wallet can be software or a physical device, and some wallets can conduct transactions while others need to be used in conjunction with a trading exchange.

The essential difference is where the risk resides—maintaining an account on an exchange is analogous to putting your money in a bank, while using a wallet is more like putting it in a safety deposit box or under the mattress.

The uses for crypto

Money is an avatar for value. In a transaction, it may represent anything from a pack of gum to a Mercedes-Benz to a freighter full of crude oil. It exists not because it has its own inherent value, but because it’s incredibly convenient for exchanging things of value with other people.

For now, its purchasing power is largely limited to other kinds of money—real-world currencies like the dollar, the ruble, the yen.

But that’s not the end of it.

In 2014, nine small businesses on Lee Road in Cleveland Heights, Ohio, worked together to enable Bitcoin transactions, becoming the first “Bitcoin Boulevard” in the United States and only the second in the world (a similar district in Amsterdam got it done a few months sooner). Part of the goal was to avoid the fees taken by banks that run credit card transactions. Unfortunately, the experiment – which included a wine shop and a couple of taverns – didn’t survive a ruling by the Ohio Liquor Control Commission that Bitcoin is a possession rather than a currency, so using it to purchase alcohol amounted to illegal barter.

In 2021, El Salvador adopted Bitcoin as legal tender and created the Chiva crypto wallet for El Salvadorans to manage their money. The move was intended to create distance between El Salvador’s economy and the U.S. dollar. It was largely criticized by economists around the world because of Bitcoin’s instability, and citizens haven’t taken to it—in part because the Chiva wallet has proven to be less than secure. With Bitcoin’s drop in value, the experiment was on life support as of early 2023.

Criminals, of course, have also latched onto the usefulness of cryptocurrency for money laundering—a disturbing but less-than-surprising reality.

Despite these growing pains, merchants around the world are finding reasons to accept cryptocurrencies for payment of goods and services, and many experts believe it’s only a matter of time before adoption of cryptocurrencies as a form of payment in routine transactions reaches a critical mass.

Even the IRS doesn’t have an issue with crypto, as long as you pay the taxes on any money you make from it.

The main risks of crypto trading

Monty Wesoloski is a client of JK Investment Group who began his crypto journey as a Bitcoin miner. Today he is a cryptocurrency consultant helping businesses accept bitcoin payments. His website is montybitcoin.com.